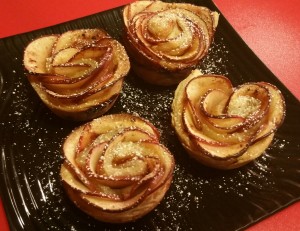 This is an impressive and beautiful dessert.  Yummy, too, especially when served warm with a scoop of vanilla bean ice cream!

Does it qualify as a Simple Brunch Idea, though?  Well, technically it’s simple (as in, five ingredients and very few steps), but definitely not easy.  Especially the first time you try it.  I recommend that you watch the YouTube video before attempting it yourself.  Maybe you’ll see something in it that I missed.
Rose Shaped Apple Baked Dessert by Cooking with Manuela:  https://www.youtube.com/watch?v=5rGrwvEjZIQ

Here’s the way I made this recipe, as well as a few of the lessons I learned along the way. 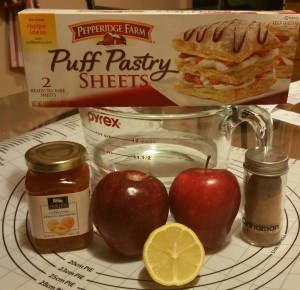 Core the apples and slice into VERY thin slices.  (Lesson one:  the
thinner the slices, the easier to roll). 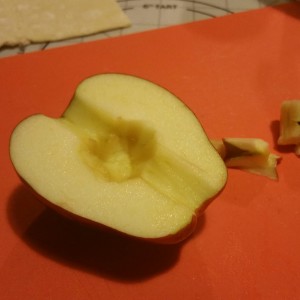 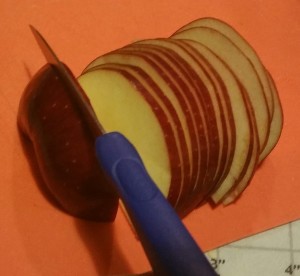 Put the apple slices in a bowl of water and add the juice of half a
lemon.  Microwave for about 3 minutes.  (Lesson two: be sure they are soft.  See the picture further down of what happens when they are not pre-cooked enough.) 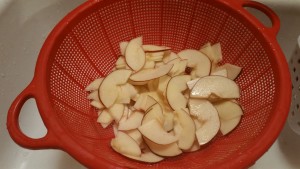 On a floured surface, unfold the puff pastry and use a rolling pin to stretch it slightly.  Cut the sheet into six strips. 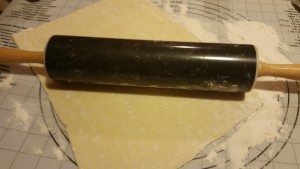 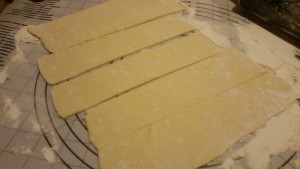 Spread a spoonful of the apricot preserves on a strip of the pastry.  (Lesson three: Don’t spend extra on high quality preserves.  The one I bought had big chunks of apricot, which makes for a delicious topping on toast, but didn’t spread well for this recipe, so I had to remove the chunks, wasting much of it.)

Lay the apple slices over the top half of the dough, overlapping them.

Sprinkle generously with cinnamon and fold the bottom half of the dough up over the apple slices.

Okay, here’s the tricky part!!  Beginning at one end, roll the apple-filled pastry up being careful to keep the apples from slipping out. 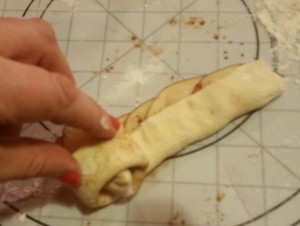 Here’s what happens when your slices are too thick and not soft enough.  It simply won’t roll. 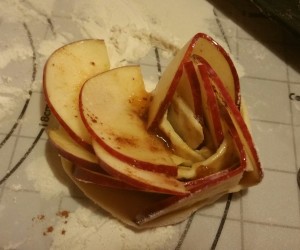 I put the remaining apple slices back into water and into the microwave for two more minutes and tried it again.  (Lesson four: practice makes perfect)  You can see the progression in the photo below.  The next two I rolled up (bottom row) were better, but still too stiff and thick.  For the ones in the top row, I used thinner slices that were also softer, and each one got better as I was practicing (left to right in picture).  So hopefully the next batch I do will all come out looking like my final rose. 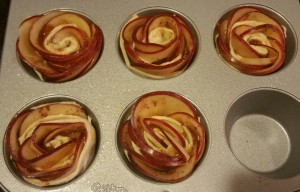 Bake at 375 degrees for 40 to 45 minutes, checking carefully since ovens vary.

(Lesson five:  run a knife around the edge to loosen the entire apple rose before lifting it out of the pan.  The edge of the first one stuck to the pan, and the rose just unwrapped as I lifted it out — that’s why there are only four roses pictured on the plate.) 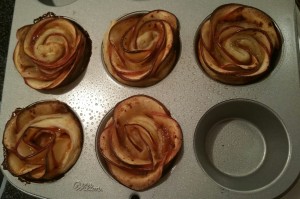 Please leave your comments, especially if you have tips on how to make this better or easier.

Yes, you CAN learn to watercolor Journal!